It has to be most lame birthday I have had in my 1000 year life on earth. First of all, I bought a bucketload of things earlier in March. Like, an iPad (admittedly, I have barely touched it up to now), and a Garmin (Love It), boots, and clothes, and things. Not to mention an inverter battery, and new tires for my car, and stuff like that. When some NGO called me repeatedly and emo-blackmailed me into donating some money, I sort of did that too.

So, all in all, it was no time to treat myself to an iPhone (like I did last year) or anything. & I went off to the holiest of holy places - Tirupati. Though I couldn't walk up the steps, go stand in the Serpentine queue, and get darshan of Lord Venkateshwara, I was happy that I could visit there and see a whole new bunch of students!

First up I met up with some 200 girls in the Engineering stream at Padmavathi Mahila University. It was a great experience to be in a room of enthusiastic, well dressed, neat and tidy students! It was great that it was all girls - strange as well! I spoke about a bunch of things and threatened to ask Chemistry questions if they didn't interrupt me. So, interrupt me they did!!

"Who is really your inspiration" they asked - after I had rattled on about Tessy Thomas and Kathrine Switzer and Lijjat Papad. I hmmed and hawed and said this and that and finally the bulb clicked and I said "MOM" - and they all nodded happily at that. And I nodded inside as well, because, well, that's epiphany in public. 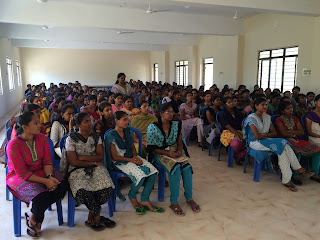 I then spoke in the weirdest shaped room in all the civilised world! I mean it was a super wide room - how to cover that much ground? I walked everywhere and had them swivel their heads like that horror movie child thingie, but still, it was weird. This was in IIT Tirupati (temp. location). I spoke about adapting to change, and marathons, and stuff like that, and it was good fun though the bunch was pretty rowdy and noisy.

Meanwhile, the child has, in a moment of inspiration, and in an attempt to avoid learning html coding that the school wants her to, started to blog. I mean, she has started today, just hope she keeps it up. I will be fine with all the hazing-the-mom activity if she keeps it up and practices writing or vents her thoughts, or whatever it is she wants to do with it. Here, read if you want to:

New Kid On The Blog