Even in the most megalomaniacal mood I couldn't write this in TWCM blog, so here I am. With some not-so-breaking news! And musings!

On Sep 29th, I ran in the 3rd Namma Mysore marathon organised by Life is Calling. I have been meaning to run in this event since inception but it was always one thing or the other. All legitimate excuses, I promise. I managed a quick trip in and out of Mysore this year for it, so glad I could. Plus met up with the family and ate mum's dosas.... Yippee!

Of course, it is an exciting thing. I drooled over the race route every year - it starts at the Mysore Palace, winds all over, hits the Kukkarahalli Kere, goes past my sister's college and my school, dad's college, Neha's college, comes back down near where we used to live in those days, and returns to the Palace again. Drool.

I am in decent shape lately, I must say. The hyderabad marathon, where I was the 5 hour pacer, was good. I finished strong. The crazy flyover runs we have been doing in Chennai actually helped a bit. I have reduced mileage since end-August as I am working with a group of beginners training for TWCM, but have been super disciplined anyway.

The first km is itself uphill at Mysore. It's a super familiar place (Devraj Urs Road) having been here a million times but I was quickly out of breath running there! Of course I started in typical fashion at an insane pace (someday I am going to learn to start slow). It stayed uphill past Regaalis etc. and then it was up and down but I was enjoying running in all these places so much that I kind of didn't worry about things till the KM 15 or so. I did slow down but was still at a good clip throughout.

I saw all the lead runners on the trail part of the run, and was glad to note that I was in third position. But wasn't sure if there were any women near me, with all the uphill parts I was sure I would slow down in the later part of the race and that if anyone was near me they would overtake me. Not that I was too worried about it, of course. If they did, they did. Nothing I could do about it.

When I passed my school - 12 years there - I really really wanted to stop and take a photo. I was grinning like an idiot. But I was also hurting a bit and didn't think I would get a good shot thanks to the high compound wall - so continued on. I was all alone on this stretch, I couldn't wait for someone to catch up with me to tell them. That someone was a nice looking chap from the Navy or something but by then I had stopped tearing up and it was cool. I just told him, my school is lovely.

Dad's college passed by too quickly and I was going down a familiar downhill. How I used to love to ride my bike fast down that part of my commute home! I advise all the people to chill out and not run fast downhill lest they blow their knee out, but I couldn't resist... One final small hill to crest - and then the course flattened out nicely, and I left behind sentimentality and concentrated on keeping to a decent time.

I ran into a friend from Chennai at some stage and he pulled ahead, strong, at a water point. I was glad to see him go 'cause the sub-2 was in the bag for him, it meant. But I looked down at my watch and realised it was likely that I could do it as well. So I urged the little heart to fight it out. Another friend who had finished earlier showed up to pace me the last few hundred meters. I didn't put in as much as a kick as I usually do at the finish ('cause I only do that if I am on a track!) but came in in 1:57 and change anyhow.

I was super duper happy with the time. I did feel like I had worked hard, and finished strong. Did my usual Viparita Karani (suspending my legs) move on some random palace wall (after finding one that didn't have any gods on it!) and drank up all my water, and stretched out nicely and walked around a lot, admiring the Palace and taking pictures...

Then waited and waited and waited a long while to finally get the chance to go up on stage and collect my third place trophy. The auto I flagged afterward had this super chatty driver who refused to believe that anyone would pay money to just participate in this mad caper of a race....

Mum and Grandmum and Aunts and all were very kicked about the whole thing... Paper had my name going on which was cool. And check me out all pink and smiling with my trophy thing! 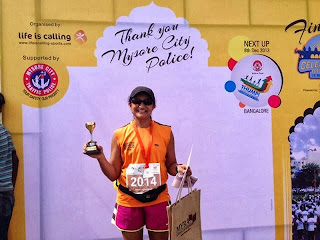