The annual basketball tournament is going on in the campus. The first year I was back here, it was amazing to watch it and think back to the days when we were in the pit. Our team always lost out early on, but one year we got a wild card entry and played a few more matches and it was great. I shot a ton of baskets and the trophy I have from the tournament - for something - I don't know - shortest player maybe - is a cherished one.

We have only watched desultorily in the past few years. We usually go together as a group and the kids have their fun doing whatever it is and we watch and comment constantly. There are a couple of local teams that usually make it to the finals (in the men's) and usually a team from Bangalore shows up. This time was no different.

We only went to the final this time, having missed the league matches completely, one way or the other. After a long and relaxed lunch we reached in time to watch the second half of the girl's final. It was really good. The girls were strong and sensible and had a great team game going on - and relatively few random mistakes - an occasional loose pass, a couple of misguided attempts at 3-pointers - nothing untoward.

They also have amazing gear - super looking Nike shoes, and the long long shorts that are common in the basketball world. And nice colours too. The tall girls weren't very tall - I mean - they weren't short - but not six-footers - but they looked strong and had good presence under the board, and every one of them was fast, could handle the ball well, and, of course, shoot. It was a high scoring game and finally one of the teams did a bit better and won. It was a great watching experience.

Then we got to the men's match. It was such a huge contrast! The players were HUGE - at least a handful of them. Obviously they were all super strong. One of them on the team could dribble the ball. The others just could not. It didn't matter 'cause they had to just stand under the board and block out the rest of the folks. One of them was fast - and every single time tried to use that to his advantage. And usually just collided with the big players and lost the ball. Or earned a foul.

There was absolutely no chemistry between the players to speak of. The teams were also almost entirely composed of Africans - with only 1-2 Indians. It was a surreal experience -didn't feel like we were sitting in Chennai at all. Unfortunately, irrespective of the nationality, the skill exhibited on the court left much to be desired. No, I am not comparing to the NBA (that stuff is entertainment, it's not about the game at all, I am sorry).

Anyway overall I walked away with a good message in my head appropriate for the upcoming Women's Day. The girls were excellent ball players, and wonderful team-mates. When they graduate from college and basketball and have to shoulder the burden of life, I am sure these skills will stand them in good stead. That they will be able to lead their life with compassion and respect for others, and a belief in togetherness, and a quiet confidence in their own ability to turn things around at crucial junctures...
Posted by Preeti Aghalayam aka kbpm at 10:04 No comments: 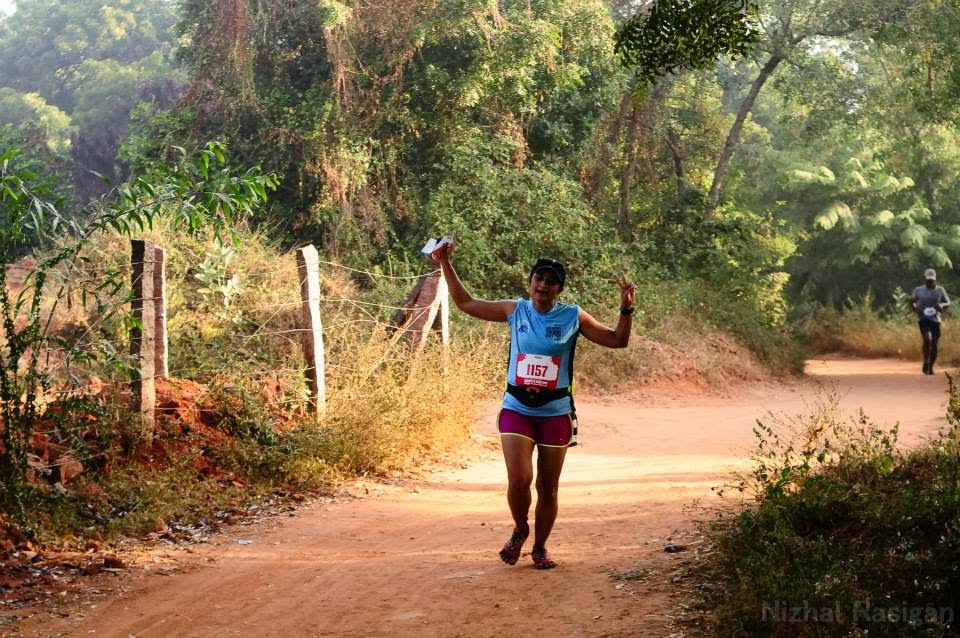 I know I look like I was walking or dancing or falling down. But I wasn't. I ran a decent enough race and stuck to the goal and finished the Auroville Half Marathon 2014 in 1:57 and with nothing to complain about! I had company throughout and soaked in the glory of the Auro forest. Words can't do justice to its immense beauty. The weekend itself was super with friends and family.

As the work week unfolded and got busier and busier, I almost forgot about my outing. Thankfully, there is Facebook to remind me. This week has been another mother-daughter bonding one. Except for a brief while last night at 9:30, I am happy that I have maintained my temper and my equanimity.

This year somehow there are many more 'projects' the child has to do. I used to feel very enthusiastic about these charts and so on few years ago, but not much any more. I guess I blame lack of time. Anyway I also decided (or was imposed upon to decide) this year that my involvement would be minimal in these. That has translated into needing to go on many 'walks.'

When we replaced our printer recently, I steam-rolled the family and insisted on a practical black and white one that can also photocopy/fax/scan. I still think it was the right call though I get it from them on an almost daily basis for it. So, I have to take these 'walks' to the icky colour printout shop in the neighborhood. The only good thing about this is that right now she is at the perfect height for me to put my arms on her shoulder when we walk!

Strangely, I don't feel like reading. I haven't read a book in a while now. I pored over the Runner's World (three of them!) cover to cover; but now I have several new books lined up that I haven't started on. It could be because I am busy with a magazine I am involved in writing stuff for. Or because of desperately trying to reduce reading mileage/time of child. Or the blasted iPhone....

How it all fits seamlessly...

Today was supposed to be 'some sort of workout.' Nothing major planned. The week feels like it has been a reasonably successful one, workout-wise. [And maybe even work-wise - that depends on how I utilise time today]. I did a track workout, & a core workout on the terrace - light weights, then a tempo workout.

With a race (half marathon through a beautiful forest) coming up on Sunday, and possibly a local martial arts class I will take (along with child) tomorrow, it feels like it's...enough. The only reason I even contemplated doing anything today is because at night you feel like if you can don't wake up and  work out, you will somehow become a fatty. Yes, it happens.

I switched the alarm off promptly and went back to my dream. My uncle was looking harried and worried and smoking a cigarette on the sly. The car had not returned. I searched every where, up and down the road, feeling increasingly more desperate as I walked further and further. I averted my eyes when he hid his fingers behind his back, and returned home quietly.

Next when I opened the door, I found a note taped to it which said 'pay Rs.70000 and get back your car.' Some addition type math was done on the side. A phone number was provided, which I called, almost grateful to have something to do. You may need a bit of back story of my dream for this to make sense (or not).

I had presumably driven my poor little car to some place and parked it. When I came out from the appointment - whatever it was - it felt like too much effort to get back in the car and drive myself (and mom) back home. So I gave the key to some hangers-on there, and my address (which they professed to know very well), got into an auto, and chatting all the while, returned home.

Which is how it came to pass that I, well, lost my car. The foolishness of it is astounding, even if it was a dream. And sometimes you have absurd dreams and you laugh them off and dismiss them as the nonsense that exists in the murky interiors of your brain. But sometimes your dreams scare you because they shine a light on your own frailties.

So yes, I have to send my car to the service station today. The place is icky as heck and a pain to drive to. I know the way now but it's not a pleasant drive to contemplate. To or fro. I saw a scary ad about cigarette smoking on TV last night. And I really need to call my uncle because he is writing messages to other people on his own timeline on FB.

Foolish- Yes? Overly trusting - Yes. Complicated - Mostly no. Well, that's me. And I am enjoying my rest day by spending 15 minutes recording this for posterity and so my grandchildren know when the real Preeti stands up.
Posted by Preeti Aghalayam aka kbpm at 06:48 No comments: