Reaching out, holding back

I used to come here to write whenever, whatever I felt like. There were times when I wrote without the use of capital letters or punctuation marks (I am not fond of punctuation, I admit). Words tumbled out of my head and I captured them faithfully using my fingers.

Somewhere down the line, I stopped doing that. I don't know why. In my head, that is the role this space plays. When I am ready to burst - with happiness, sadness, euphoria, or just a confused jumble of thoughts not necessarily happy or sad, just hard to describe - I want to be able to write, here.

I have no other outlets, this I have come to realise. I pick up the phone, in fact, I spoke to my mum for a long time this weekend without saying anything. That is fine, I don't necessarily have the words even if you were willing to listen, to understand.

Sometimes, I get scared. I guess I have a long way to go. I am referring to my age more than ever these days. It has turned out to be a big joke. Maybe the looming big four-oh is responsible, I don't know. But I have a feeling of time, running out. And I worry about the child, mainly.

Yes, this is not a post about running. Or about the child. Or anything at all, if you come to think about. I am here to say that I am here. And worried, and confused, and tired, and sad. I find myself asking myself 'Is this it, is this it?'

I can feel it the moment the mood lifts. The sun seems brighter then, not in an unpleasant make my armpit sweat way, but in all is well, for now, pleasantness. I completely block my mind then to the darkness, quickly. But till then, I wait, and watch the grey and hate the hate. And try not to worry that time is flying.
Posted by Preeti Aghalayam aka kbpm at 11:03 6 comments:

Last year, during the Dream Runners Half Marathon, it poured cats and dogs. My garmin died as I was getting out of the car. I borrowed The Cat's watch, which was set in miles. My ankle (or something) was bothering me immensely so I was all iffy about it. I ran like crazy and did super well though, getting my PB and a nice little trophy. Got soaking wet but escaped blisters thanks to the vibrams.

This year, I was really looking forward to the race. I fit it in nicely into the Hyderabad Full Marathon training plan I am following. It fell on the correct weekend. I had nothing big happening around the event. Aside from what felt like usual and minor niggles, I felt great going into the weekend.

The event has grown in size since last year, which is great, I am very happy for my ever enthusiastic friends, the Dream Runners. The expo on Saturday was at this nice hotel. We breezed through the bib pick up and returned home. I took the child to the swimming thing and hung out there, watching her, for a long while.

I slept reasonably well, and woke up fairly happy (just a bit sleepy) at 3:30 am and got ready with no fuss. Usual bread/coffee combination. We were wearing the super awesomely nice promo tshirts for our upcoming event - The Wipro Chennai Marathon (Register Now!). The size was correct and it felt great - soft and so on.

It was a very humid day - not that I am unused to it. But I was not in super dreamy (!) shape from the get go. My concentration seemed off right from the start and I just don't know why that was so. Years of running means that I managed to stick to goal pace for 15-16 kms without significant trouble. The moments of panic that arose, I could ignore, till then.

The course was fantastic and it felt great seeing friends all along. I had my bottles of electrolyte and water and I sucked on them periodically. I evaluated that I wasn't hungry - maybe I should have eaten up a Gu nevertheless at 12 kms like I usually do in HM races. In recent times, I have been avoiding eating anything in HM distances in training, but still, I think it was a mistake.

I slowed down and even took a very short walk break - which I never do. I saw my time goal fly out of the window but wasn't in a mood to worry about it. The mind felt reasonably alert. I say reasonably, and not super alert, which as we know is not a great thing. Traffic was stopped so I was broadly OK, but still.

As I said to someone later, I had to dig deep into the mental reserves bucket to ensure that I ran through the last two kilometers and finished looking somewhat strong in 2:04. I did feel close to collapsing at the end line where a friend of mine from the organisers grabbed me for a photo. Thankfully, I bounced back in a couple of seconds and gave a watery smile for the camera.

I knew I had placed third among women despite everything, thanks to the out and back course and being somehow alert enough to count the women ahead of me. They gave me a huge cash prize for it and I posed for photos and stuff, and managed to be all upbeat about it all. There were so many friends around at the finish point, and once I drank about a hundred liters of electrolyte, I felt fine, so that in the end it turned out to be a tough but satisfying Sunday.

I have run half marathons in the past where I felt bad and I sort of didn't push after that. My times were bad (far worse than this one) in those races, and I felt a sense of discontent afterwards. On Sunday, I was hoping to do better (mainly in terms of strength at the end, and secondarily, on time), for sure, but I don't feel overly bad about my performance compared to previous outings. I have run lots of HMs now and they had just started to feel easy.

This time I experienced something that I talk about all the time - the marathon - half or full - is a distance to be respected. I rarely run races without training, but sometimes, even when theoretically everything is in place including training, things go wrong. And that, is why I love this sport. Because it is constantly challenging... 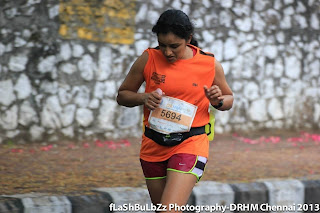