I spent an idyllic week in Mysore. Despite my misgivings about leaving Chennai in the one month when the weather is awesome and music is abundantly in the air, it was a most enjoyable and relaxing week. The weather was even more awesome in Mysore (which isn't saying much, it is always great weather there), and I put my feet up, slept a lot and totally decompressed.

Let me set the scene. The child was slated to go on a vacation trip with my sister and her family. We head out bright and early one day, drove to Bangalore, with only a bit of delay due to traffic. We saw the child, her cousins, the dog etc. off in their Innova (stuffed to the gills with food and dog food and stuff). Then we slowly found our way to Mysore.

It was strange, being by ourselves. But we weren't complaining! We reached in time for mum's special coffee in the evening. My grandmom (89 years old as of current date), was there as well. So it was bound to be interesting for my husband with three generations of women, not too different from each other, all together for a pace.

As evening wound around, I had answered Paati's query about the missing child about 20 times. And assured her that I would be around for several more days. We legged it to my aunt's place and met up with my cousin who regaled us with her stories from Switzerland. Which sounded awesome. Like wear a backpack and head off every Friday exploring a different part of that wonderful continent. All well connected by trains and breathtakingly beautiful vistas. "Read the Bill Bryson" I told her.

Our best intentions notwithstanding the days dawned only at  8 am for us. My mum giggled at my tendency to set the alarm for 7 am. And tried hard to make Paati 'speak softly' at 6 am when she drinks a cup of sickeningly sweet Horlicks. "What must the world be like once you lose so much of your hearing", I wondered, as I snuggled back into my bedsheet and caught additional winks.

Alternating reading a book by Lavanya Sankaran, a not-bad South Indian writer, and watching Sherlock (that Cumberbatch may be yummy but it's Martin Freeman I like, short, witty, and no dark spaces in his mind somehow reminds me of someone....), was great. Lunch and naps and explaining about the child dozens more times. "I like this modern re-telling with the Whip app on iPhone" I remember thinking.

The run was great as usual, even if I did drop my husband at some stage and take off down the path. One 50m stretch along the Kukkarahalli lake is really stinking, like puke-inducing, don't know why. Then a new problem in front of as we found the gate locked securely. The open gate was a Km away, no big deal, but our car was here. So up the gate we climbed, jumping over, and crossing the road to our car. "Not bad for oldies" I said to him.

I wore pants, not because it was cold (it wasn't that cold at any rate). Ignoring mum's arched eyebrows (So what if it is 9 am, as good a time as any other), we googlemapped our way down to the base of the Chamundi Hills steps. Relieved to see several sneaker-clad denizens. 1034 steps up. Brief forays to check out the Nandi and the Mahishasura. Hi-Bye to the god from outside the temple. A few Kms running down along the road, back onto steps rest of the way. Shocking mom by eating breakfast at 11 am. "Been meaning to do this for years now" we said, simultaneously.

Visiting family, chatting desultorily, more TV, assuring Paati I don't need her to cook anything for me, that I get sambar powder in Chennai, reassuring her that the child has a real name aside from the pet name we use to call her, 20 more times of telling her she is with my sister, loudly telling her about my niece's singing prowess, reminding her that all of her great-grandchildren are also girls (as are all her grandchildren), and trying to not argue with her when she said "Okay it's fine, what can one do?", and before I knew it my book was finished.

Maybe it's Alzheimers. Or Dementia. Or sometimes, she does it on purpose to irritate my mom. Maybe. She is pretty active generally and as she insists on telling everyone multiple times, does her work herself. We don't let her cook any more, but aside from that she is independent. She informs everyone that she is "LS Pass" and that she know to read write speak four languages. Although it was sad to see how bad her memory is (she forgets within minutes!), it was also inspiring talking about all she has done in her life. Born in 1925. "Wonderful man, your grandfather" she said, many times.

All three of us with our noses in books - me only English ones, mom English and Kannada, paati Kannada and Tamil. There were these really tranquil moments between the bathing-eating-sleeping routines of the day that were so precious. My husband was mostly a surprisingly quiet bystander, but he looked very happy himself! My grandfather was an innocent one, his being robbed of a finger ring by someone is a story we tell often. He asked for the ring and thatha gave it. Obviously the guy slipped away. My dad once handed over a 100Rs.  note thinking it was 10, somewhere in Tirupati, and later was so very ashamed. Although he has his moments, one hopes the third generation husband is more connected to reality.

I read the Murakami (Norwegian Wood) during the second half of my stay there and since cats only made a brief appearance, could focus on the writing much better. And ponder at length about mental states. A simple life filled with words is what I would like the most, but I wonder, if I did not keep myself so pre-occupied with the various trappings of life in the 21st century, what would I be? Twenty, forty years on, when I (hopefully) get off the treadmill, what will my mind be like? "Eat almonds" they say, "Solve the Sudoku" they insist. But I see into my Paati's eyes and I read a different message "Accept yourself" ...

I leave you on an enthu note with a few photos from our Chamundi Hills climb. The Asura who was vanquished by the goddess, who lives on the hill and protects my beautiful city. The beautiful bull Nandi. Scenes of the city from the hilltop. And us, in our running gear and sunglasses against the 11am glare (The pumpkin is in the frame, I am lazy to remove it).... 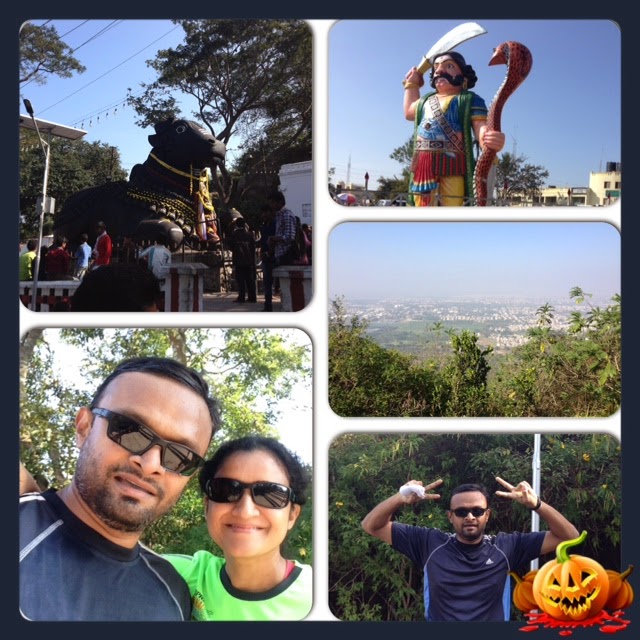