When I was a child, I couldn't nap in the afternoons, like I just could not do it. In the summer months especially when the entire world would seemingly be asleep, time hung heavy. In recent times, as long as there isn't much noise around, I can nap, but not back then. And it was boring as hell.

After I got a BFF who was as insane as me, it was better. We cycled in the scorching sun with lots of coconut oil rubbed into our hair. And occasionally tortured less insane classmates by insisting on ringing their doorbell at 3 pm. A loud scolding in Telugu would ensue from the corresponding parent and we would giggle and cycle away again.

Sometimes, my ever busy mum would set herself a task for the afternoon. Making kodubales was one such task that happened periodically. Kodubales, in case you don't know, are these heavenly tasting spicy murukku like things. Way better than murukkus, though. Spicier, for one.

I invariably volunteered to help out. Not that she asked me for help, but she couldn't possibly dismiss me outright if I insisted on sitting my ass down in the kitchen. She would be pre-occupied. And I would be, chatty, as usual. Constant chatter, I would keep up.

Mum is super organised (and clean). The whole task of kodubale making could only start once the lunch operations were completely wound up. Meaning every last spoon washed and put away, the left-overs transferred into smaller vessels and moved into the fridge. And the floor cleaned to perfection.

Of course all this stuff made me impatient. I suspect mum did a few extra things just to see if I would somehow fall asleep and leave her in peace to muse and fry kodubales by herself. Though sometimes my aunt or grandmum would come over and they'd be wanting to talk all types of stuff they didn't want me hear so that could have been the reason as well.

Finally the event would start. I would sit on the red floor shaking my leg with impatience. The big plate would be brought down and the first batch of the floor kneaded. I would watch it hungrily (not wanting to eat them though!).

She would try out a couple of them and do some corrections to the consistency or whatever. I didn't care. I would pick up another plate and start. You make a thin cylinder. Then you twirl it, into a spiral shape. You keep the ends thin and a bit pointy and fuse them on. They look disgusting. With flecks of red (from the chillies).

If I did well, she said 'mmm'. If I sucked it up (sometimes you just dont get your cylinders thin enough, sometimes, the damned thing just doesn't twirl properly), she would just re-do them herself, rather heartlessly, I must say. Each batch that goes into the hot oil has to be of the same size.

In between these activities, we would chat. It was years before I got good enough at it. The last time we did this together, mum made the dough, I rolled them all as quickly as she could fry them. Because her fingers don't like her doing this twirling thing any more. But the talking was the best.

I learnt so much about how women's lives work from such activities. I heard all about my aunt and her married family. I collected all the requisite goss on various others. Sometimes they told stories, family legends. And sometimes they just vented about their lives. Sometimes it was advice. What fun!

Yesterday, I was browsing for recipes for Kozhakottais. Some newfound enthu. I like my new kitchen. I cleverly convinced my cook to not come, that I would 'manage'. I was super excited about cooking. I love cooking, especially for my husband who is most un-fussy and loves everything I make.

The child walked around the computer and convinced me that Kodubales are her favourite thing in the world, ever. I was pleasantly surprised to hear that and, in a moment of weakness, agreed to try to make them for her. In addition to various other things for good old Ganesha.

I finished up with lunch. I started processes for the Kozhakottais. I didn't wash dishes. Just put them away in the other sink. I didn't clean up the kitchen over-much. Just wiped down the counter. Hey. I am not my mum, after all.

Our kodubale dough was off. I am guessing that the rice flour wasn't too good. The colour was also a bit dull but that happens, not a big deal. Our shapes were absurd. The cylinders just kept disintegrating. She had a greased plate and I had a greased plate. We were both equally unsuccessful in twirling.

We finally made a few mini-spirals and a few simple circles, and left the rest in cylindrical form. She made a triangle and a tear drop. We had great conversation, of course. Its almost the most important thing about kodubales... Which tasted pretty good despite me violating so many rules....
Posted by Preeti Aghalayam aka kbpm at 21:56 3 comments:

Labels: Me; Child; Memories; Growing up

We did this last year and it was...fun. Difficult to pull off, but fun. Had one or two 'interactions' that were tough; I was also scaling up mileage as training for Mumbai Marathon and would do crazy things because of that, but overall, it was a great experience.

It started off I think with a discussion Deshvaasi & I had with the Chennai Runners. They asked us how many runners from the campus we expected as participants in the race. I think I said 25. And he said 50. We finally had like 500 registrations! Wooo!

So we decided that we should have a formal set of sessions where we just say a few simple things to race participants. Increase mileage slowly. Do some stretch/strength type things. Don't have to run everyday. Focus on your breath. Don't just up and run the race. Stuff like that.

There were never 500 people at our Saturday morning 'Training Sessions' as we called them, rather egoistically. There were at best 15 people I think. But still, it was great. It felt like an activity that would scale up well. And I know at least a handful of young people who have picked up running as a part of their keep fit routine since then.

I called my trusted friends Basa and ludwig to join me today. So we were the middle-aged folks. Then there were a bunch of young guns. I am scaling DOWN my running mileage currently. Because I want to work exclusively on strength for a bit; plus, my long run is scheduled tomorrow. So this time it worked great for me, personally, in terms of my own training plan.

I think the activity will grow, for sure. I sent the email out late (around 7 pm last night). We haven't tapped into the previous year's email lists as yet. I was really keen to get the thing rolling today and then worry about the tweaks, later.

In many ways its just awesome to see enthusiasm in young people. They find it hard to wake up in the mornings (yes, 6:30 is super late for a run, but even that is early for them!). They also have their share of inhibitions. Seriously. Its difficult to start something new. 'Race' is still a scary word to most; because the concept of it is unclear to them.

I am just glad we were out there today, and hope that this becomes part of the weekend routine henceforth... The race web-page, if you are interested is The Wipro Chennai Marathon (Dec 2nd, 2012).

The staircase is still not done. The basement - I don't even enter it yet. And we might have an infestation of, of all things, crickets. But this place felt so sweet to return to... I think I am aging. You could have knocked me down with a feather even five years ago if you told me I would yearn for home so much.

The Netherlands was just amazing. Lots of things I loved. Most of all, renting a bike (thats a bicycle, folks, a slightly rickety creature in my favourite colour - grey) and riding all over the city, admiring the bike lanes, and the views. 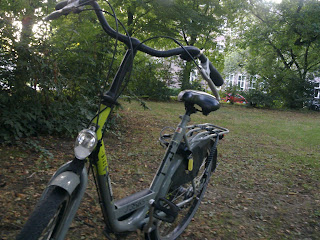 (It was brutal on the ass but an exhilarating feeling on the high bridge!)

My Bangalore trip prior to that was great, I was at a Society of Women Engineers meet. I *might* have gushed a bit about how it was super not to be a gender minority for a change. My presentation was much loved it seems. Tried to run inside ITPL but that sucked.

I have met innumerable awesome people these past ten days. In no specific order, the security guard at ITPL who has promised to do reiki (what that means I don't know!) so I can run better in my next race, and win a prize. The Emirates on-board lady who gave up her veggie meal so I wouldn't starve. The young woman at the Hotel desk who blushed pink when I told her her city was beautiful... And yes, three policemen.

But more about that in a later dedicated post. Since I have been remiss so far in mentioning this, and I recently read that article about how its yawn inducing to hear people talk about their races in excruciating detail, I will be brief.

I ran the Hyderabad Full Marathon a couple weeks ago. In Hyderabad. The course was super tough (for me) with lots of elevation gain - rolling hills and flyovers. I was a little concerned about my poor training (thanks to being sick with that awful chest congestion thing for weeks). But I did okay. Plus the family was there cheering me on which felt great.


I finished in 4:39 and am the fourth woman. Which makes it seem like I missed the 3rd place cash prize by a whisker. NOT! The third place woman, finished almost an HOUR ahead of me. There were only 18 women registered in total so you do all the math. I am cool. It was a tough course and I did my best.

I give a lot of gyaan of late about training and so forth. My training for my first full - the Mumbai marathon in Jan 2012 - was sharp. Sensible, but sharp. No speed work; some tempo, lots of solid mileage, plenty of core and leg strengthening. I did speed work this time but I was not happy with any of the other parts of my training. 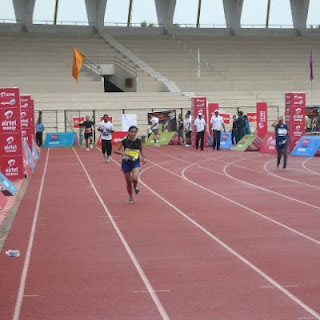 (I loved the last 100m stretch inside the stadium; saw child and husband, and sprinted)

And it shows. If not in the timing - which is decent overall - in my recovery. In Jan, 11 days after the full, I ran a PB half marathon. My ankle hurt a bit but I was in great shape otherwise. I am not now. I have also traveled almost continuously since the marathon, but still.

So its back to the drawing board now as I figure out and fix my training regimen. Oh well. I am back now and sitting up in my bed and using my own home wireless and the child is annoying as ever sleeping in orthogonal direction to prescribed. Plus no one is trying to sell me water "mit gas" for Euro 3.95.... I am counting my blessings for sure...